The discussions about this theme almost inevitably fall on a biased statist (even if not consciously) view that takes for granted that State will give us security, and that we must make a true choice between security and freedom. On the other hand, this may allow extremists to be sanctified as freedom-fighters. They will always find some fringe of public opinion that will support them for being against the evil western capitalist powers, accusing this countries of either not being enough tolerant towards misogynous totalitarian religious beliefs or of being too tolerant in face of racial or sexual minorities.
To break these mistaken views and to clear all foggy discussions, I think that we must adopt a more coherent but also dynamic starting point: the concept of freedom in its multiplicity. To do so, analysing both the “pro-security” and the “pro-freedom” arguments is crucial. 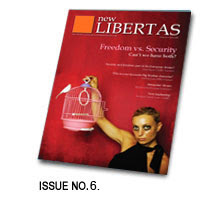 The concept of security is in fact an empty one if it is not submitted to freedom: I am safe if I am not under the potential or factual harm of others, that is, if I am free to act under no illegitimate violence. Statal violence isn’t any better than other forms of violence if not to protect individual freedom. That is a key point that must be stressed.
Publishing the PATRIOT Act doesn’t make political repression, private communications’ violation or torture any more valid on a moral basis. The defeat of “pro-security” arguments starts at its very beginning: giving huge powers to obscure and self-illuminated bureaucrats or politicians does not create security. It only transfers (or, more probably, sums) the sources of insecurity. For example, can French citizens feel safe if secret services – under the noble mask of the fight against terrorism – start gathering information about their political activities, sexual orientation or health status (let’s see what will happen with Edvige and Cristina)?
On the other side, we have “pro-freedom” arguments. This is a much more difficult ground. Freedom is the core issue, and the proof of that is that even when we put it against the concept of security, we do so in order to know which is the most balanced position: we don’t want that freedom may be used against freedom, and so we must put some kind of restraints. Defending the rule of law is a political, ideological, moral conviction; it is also, pragmatically speaking and in accordance with the previously written, the best way to defend security.
Nevertheless, we must also keep in mind that a law that is not able to protect individuals from harms (whatever the source of such harms and whatever the origin of this law’s inefficiencies may be), that law, rules nothing.

I do not believe that straight answers can honestly be given when we presently face a deadly combat with terrorists that fear nothing (not even death) except the possibility of not entering an imaginary place. It is quite different from other clashes of European recent History, such as extremist left or right terrorist movements, or even the secessionist movements like IRA or ETA. But I am convinced that setting axiological priorities – Freedom as the beginning and the end of any political decision (and understanding the polysemic senses of freedom: freedom from the State, from other individuals, from social constraints, life, privacy, absence of violence, etc.) – will allow us to have at least a rational criterion for decision-making.

Europe: Between pragmatism and utopia?

Happily, what happened in Nice was not exactly a setback. Europe was never more Europe than it is today. What suffered a severe setback in Nice was europeism, the passion, the utopia, the want of a Europe that is not just a well succeeded collection of national egoisms […].
Eduardo Lourenço, in Europe Disenchanted – For a European Mythology

Dutch, French, Irish. Are all these three people eurosceptics? Does No mean No Europe, No to Europe, or does that mean No to this Europe? But what other Europe could there be? Isn’t there just one reality – geographical, political, historical, cultural?
Well, the question already gives an answer. Europe may mean several things. The question is if Europeans are against Europe, against European Union, against what exists or instead if they are more radical and they don’t really want what Europe intends to be. That would lie on a conviction that everybody knows what Europe in general, and EU in particular, will be, or at least wants to be. Is the No caused by EU’s goal or is it because, bluntly saying it, nobody knows what is its goal?

The European communities started with quite a parsimonious (at least by our present standards – not so by those of the 1950’s) set of policies (controlling coal and steel, for example) but with the strongest moral convictions and a sophisticated theoretical pillar. Neofunctionalism – both influencing and being influenced by European integration process – proved to have a point: economical integration furthered political and (more) economical integration.
It is disturbing that, while having simple targets, European communities had such idealistic and – let’s put it that way – utopian elites. On the other hand, and since the 90’s and in the beginning of this new century, when the integration process came to real political union, we see a spillback; not a practical spillback, but a moral and a political one.

The main problem seems to be not a lack of existence of Europe (we so often forget the number of things we couldn’t do with no integration process) but the lack of direction. Let us see the Irish example: 80 to 90% of the electorate votes for europeist parties. In general, they vote for democratic, pluralist parties that defend civic, individual and social rights, tolerance, free market, environmental protection.
Ideological differences aside, this common set of values, shared by an overwhelming majority of Europeans, may perfectly be seen at the heart of Europe as a project. As Kant observed, we need regulative ideas of reason: we know that we cannot attain an ideal situation, but we can (we must) try to reach situations that are closer to this ideal. It is a utopian departure point (we set our eyes on something that doesn’t exist) to reach a very pragmatic approach on reality (how must we act in order to reach a better situation?).

Given this, given that Europeans do have a common set of ideals, what is the problem? Does EU lack utopia? Well, it seems so. The realpolitik arrangements, intergovernamentalism (with governments criticizing back home and blaming “Brussels”… for what they negotiated in Brussels), negotiations around CAP (swallowing over 40% of EU’s budget for political reasons and with – at least – doubtful economical results, both in Europe and abroad), the opt-outs of the United Kingdom and Poland on such basic things as labour laws or sexual and religious tolerance are not exactly a very good way of handling the idealistic and humanist inheritance of Robert Schuman or Jean Monnet.
So if core values do exist, but the practice has been at least not very good, probably a bit of utopic pragmatism (we know what we want, we haven’t yet found the best way to get it) may be a solution. Europe already has a kratos – an institutional building. What it doesn’t have is a demos, a European people, that is: people that think as Europeans (and not just as part of their national communities).

CaféBabel is surely a way – through media and public opinion – of making that European people. But in the last years (and sometimes precisely in consequence of some No in a referendum) political campaigns have been arising. Probably, and over the time, they will multiply. There are very good examples of what is coming in the next years, may that be one single and simultaneous referendum at an European level (EuropeanReferendum.eu), the pre-electoral presentation by each European party of their candidate for the Comission (Who-is-your-candidate.eu) or transforming what has been until this moment loose parliamentary groups at the European parliament in true, effective parties running for the EP (FiveDemands.eu).
So many utopic demands can only have good results. Over a century after Victor Hugo’s speech at the Congrès de la paix, the European communities were born. That was an astonishing leap. We don’t need that much time to take so little steps.